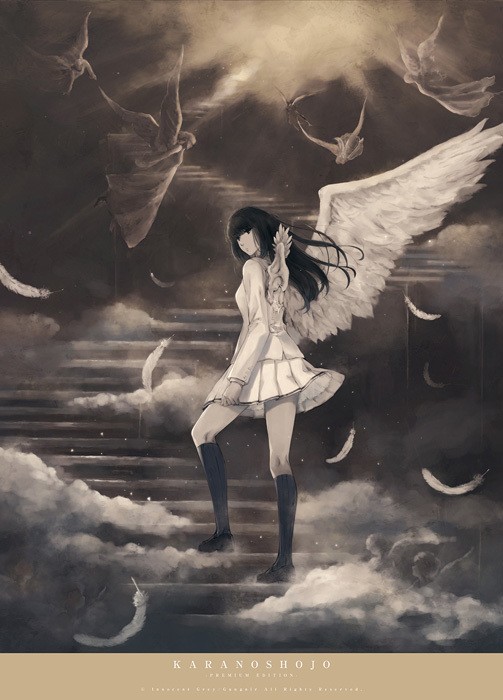 「*Stars sparkling in the night sky *
*Flow, leaving a trail *
Almost reachable, but not quite
Stars in the distance」

Discovery of Kuchiki Toko’s remains didn’t leave Tokisaka Reiji any time to grieve.
Chasing Kuroya Naori who took the infant and concealed his whereabouts, is the mission left for him.

At the same time, the creator of「Kara no Shoujo」, Mamiya Shinzou gives out his last breath.
Heart failure without a cause.
But it became a trigger for another incident.
Corpses looking as the angel in Mamiya Shinzou’s unpublished work 「Divine Punishment」, are being discovered one after another.
Masaki Tomoyuki’s former colleague is one of the victims.

Two Paintings.
Without saying anything, the girl in the painting
kept talking, in a voice that could not reach.

…No.
Makoto can’t come with us, because he had done bad things.
But still… I think Toko wants to see him.
Because she was a lonely person.
Don’t forget.
The blue bird of happiness will be reborn any number of times.
The blue bird that passes through heaven will sweep down once again.

2 thoughts on “[Innocent Grey] Kara no Shoujo – The Last Episode”