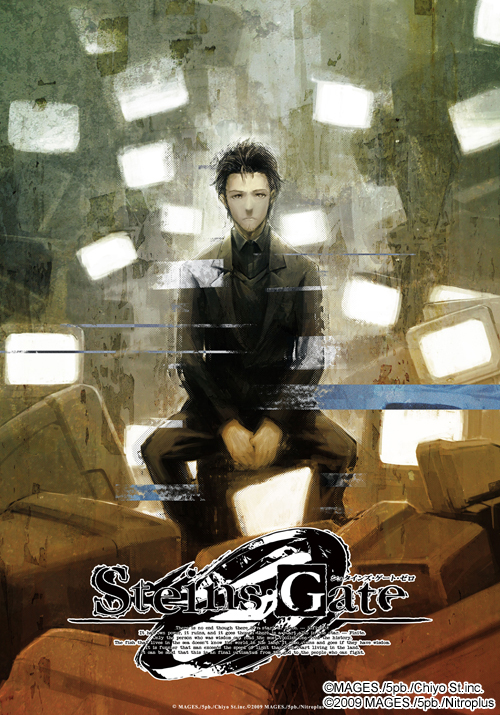 A “true sequel” that takes place November 2010, β Timeline — A world line where the protagonist, Okabe Rintarou, at the end of overcoming countless hardships and sorrows, had given up on saving “her.”

And what about the “girl” he wasn’t able to save?
Learn of it through the tale of “zero” where new encounters converge.

“She,” without a shadow of a doubt, continues to exist in there…

After long journeys via world lines, Okabe returned to his daily life, albeit crushed by the regret and misery of not being able to save “her.”

While helping out in a college seminar in order to finish off what “she” had already started, he comes across Professor Alexis Leskinen and assistant Hiyajo Maho, who were both on the same team and school as “her.” There, he discovers “Amadeus,” a system still in the stages of development that can store human memories inside computers.

Okabe was told that the Amadeus had “her” memories stored inside, and was requested by Professor Leskinen to cooperate with him as an Amadeus tester by means of conversing with “her” through a monitor. The system was inputted with “her” memories before “she” had ever met Okabe.

Upon encountering “her” installed within this architecture, Okabe’s life begins to change completely…

It will include stories from three of the Steins;Gate novels, as well from some drama CDs.